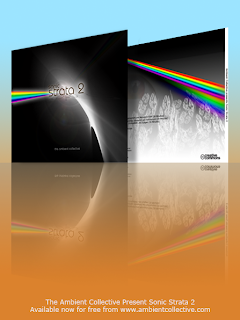 It gives me great pleasureto announce our latest release.
A sequel to one of our most popular releases...
Sonic Strata 2
Featuring only 3 tracks but all 20 minutes each.
How was this concept developed?
Three teams were chosen:
Team A consisted of Tange, Annode, eigensphere and Modulator ESP and created Part 1.
Team B were usr/sbin, Gregg Plummer, Sonoprint and Somnarium and produced Part 2.
Team C brought together Steve Gane, Altus, Litmus0001 and Jujigen and made Part 3.
The first layer of each track were created by the first person in the team and then emailed to the next member were they then put their layer down and again it was passed to the next in line and so on.
And the end result?
Three beautiful ambient pieces combining all artists from each team.
This is truely an excellent release and is highly recommended.
Concept: Somnarium.
Artwork: Bluejooz
Enjoy,
After all, it is free...
Sonic Strata 2
Bluejooz
Posted by Ambient Collective at 4:08 PM

Who Are We?
We are a small, independent online net label that was established in 2004.

We release collaborations under the Creative Commons License which are free for all.

The beauty of this genre is that it is so expandable. We release so many different styles ranging from noise to glitch, from soundscapes to full blown soundtracks, electronica to folktronica... the full works. Except for dance music... unless of course it's IDM and deep with ambience ;)